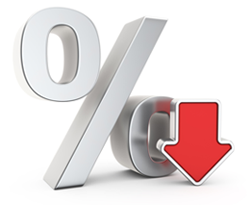 The April effective fixed interest rates for Small Business Administration (SBA) 504 loans remain among the lowest in program history, with the majority of rates still under 3%. This marks 11 consecutive months with 504 interest rates under 4% - and for the 20-year rate, that's back-to-back months under 3%.

“While the previously downtrodden stock market rallied, Treasury rates eased back still acting as a safe-haven instrument, but also aware of how much money Treasury will need to print. After seeing spreads gap wider due to credit concerns, markets regained their equilibrium with the original Fed initiative and the TALF program's expansion to include additional product, which helped even more.

“The relative calmness that support provided was beneficial for the 504 program's (April) debenture sale that was well received by investors who participated in the largest monthly sale since July 2013 ($421,208,000). At 1.64%, the 20-year issue was just 15 bps higher than in March, which set the record for the lowest term rate in history,” said Keane.

The SBA 504 Loan Program provides up to 90% financing at below-market, fixed interest rates and long amortization terms up to 25 years for the purchase of major fixed assets, such as owner-occupied commercial real estate, renovations, new construction, energy efficient “green” initiatives and/or fixed heavy duty machinery and equipment as well as commercial