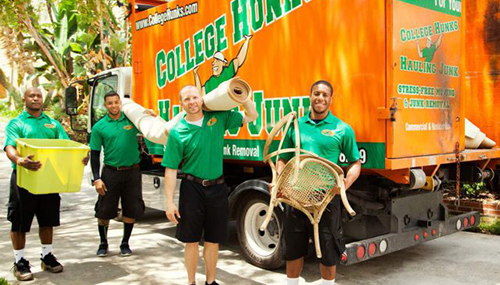 It all began with a dream and a great name. A dream between two college buddies to create a small business that was unique and catchy, but also lasting and meaningful.

It was 2003 during a summer vacation when Omar Soliman and Nick Friedman got a beat-up cargo van, named themselves the College Hunks and began a junk removal business. By 2005, through hard work and a dedication to providing reliable and trustworthy services that were needed in their community, College H.U.N.K.S. Hauling Junk was booming not only in junk removal, but expanding with moving services as well.

In 2007, College H.U.N.K.S. (Honest, Uniformed, Nice, Knowledgeable, Service) Hauling Junk & Moving expanded into the franchise arena and took off across the United States and into Canada. Today, College H.U.N.K.S is the fastest-growing franchise of its type in America.

College H.U.N.K.S has been in demand - from franchisees, customers and the media - because their systems create a great experience for their customers and their franchise partners. Chief among those systems is their national call center, which books and schedules jobs for their franchisees seven days a week - a service that saves franchisees money and time. The call center also makes the business easier to manage. That's important, because there is tremendous demand.

When it came time to expand their call center to handle nationwide calls, Soliman and Friedman utilized the Small Business Administration (SBA) 504 Loan Program and worked with Florida First Capital's Scott Radway who partnered with Aaron Jimison of Valley National Bank to finance the $4.42 million acquisition of an existing 46,765 square-foot office and warehouse building located adjacent to the Tampa International Airport.

“This project reflects the 504 program's ability to facilitate growth through capital preservation,” said Radway, VP and BDO for the Tampa Bay Area. “The low down payment, 10% in this case, allowed the business to preserve the maximum amount of working capital, which enabled it to hire more staff and continue the expansion.”

As a result of their success, Soliman and Friedman were named two of the top young entrepreneurs in America by Inc. magazine. They literally wrote the best-selling book on entrepreneurship, co-authoring "Effortless Entrepreneur" to share the lessons, planning and strategies that have made College H.U.N.K.S an overwhelming success. The company also was named one the fastest growing companies in America by Inc. magazine and has made Entrepreneur magazine's list of top franchise opportunities for five years in a row and counting.

One of the things that makes College H.U.N.K.S unique is that they offer two services in one franchise - junk hauling and moving. The two services have the same basic needs: trucks, muscle, great management and bold marketing. The two business models are distinct, but share a lot of overlapping needs, so by offering both services franchisees are able to generate more revenue while getting the most out of the resources they put into their businesses.